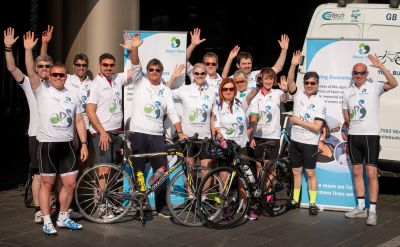 With the success of last years cycle ride, the team from Heart Valve Voice embarked on their second awareness raising cycle ride one year later. Team members cycled from London to Paris to help raise awareness of heart valve disease and the need for improved diagnosis and access to treatment. The cycle team was be made up of HVV Chief Executive Wil Woan and 13 clinicians and patients. The journey began in London on 21 May and finished with a ride up to the stage at the EuroPCR Conference in Paris on 23 May.

This year we were pleased to have two patients along for the journey with us. Marina McGrath and Gerry Kijak who not only were important members of our team but also were amazing examples of why raising awareness of heart valve disease and the need for diagnosis and treatment is so crucial.

“I couldn’t have been more thrilled to be participating in the cycle ride with Heart Valve Voice this year,” said Marina McGrath, Heart Valve Voice Patient Action Group member and former valve disease patient. “I followed Pat’s journey last year and it was so inspiring. I am hoping that when other people see me cycling along with the team, it will inspire them to get checked or to encourage their family or friends to speak to their primary care practitioners about getting checked for valve disease. Treatment saved my life and look at me now!”

We were also excited to be partnering with the British Society of Echocardiography this year and were honoured to have Keith Pearce, President British Society of Echocardiography and Consultant Cardiac Physiologist at Wythenshawe Hospital on the team. “Events like the London to Paris cycle ride serve as a great way to raise awareness of a disease that, while extremely common, is relatively unknown by a large percentage of our population,” said Keith. “It is so important that the general public, particularly those over the age of 55 are aware of the symptoms involved with valvular heart disease and that they are having their hearts listened to and, if needed, being referred for an echocardiogram so that they can be diagnosed/treated/managed in a timely way. With the diagnosis confirmed on echocardiography the clinician can ensure patients receive the right treatment at the right time, and therefore improving the optimal outcome for patients.”

While this year was filled with ups and downs, and not just the hills, all in all it was a great success. The team formed an strong bond and supported one another throughout the ride. On the final day, while some were still out on the road, we had half the team there to support us on the stage at EuroPCR where we told the crowd why we are all so passionate about the cycle ride and raising awareness. Heart Valve Voice is so proud of the team and can't thank them enough for supporting the cause, the charity and events like this.

We need to thank our supporters; Bicycle Buddy who took care of the team and made sure that everyone was safe. They have been brilliant at keeping us all on track and at troubleshooting any issues that arose. We also want to thank our generous sponsors, EuroPCR, The British Society of Echocardiography, BISMICS, Edwards, Cryolife, Abbott, Park Plaza Hotels Waterloo, Arragon’s Cycle Centre and Cyclism and all of the hospitals that cheered us on along the way.

Thanks to everyone for making 2018 Heart Valve Voice Cycle Ride another brilliant success, we can't wait for 2019.