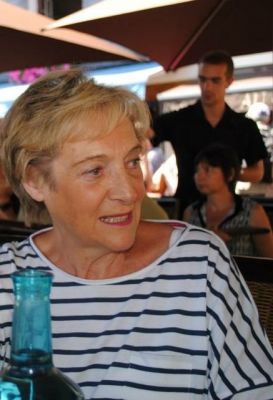 Marion Carrol, mother of Adrian Carrol and grandmother to Jonathan Carrol, tells us why she is so proud of Adrian and Jonathan for taking part in the cycle ride.

I couldn’t be prouder of my son and all of the work he has done to help raise awareness for heart valve disease and I fully support him on the Heart Valve Voice Cycle Ride. I’m also going to be cheering on my grandson Jonathon Carol who will be apart of the Heart Valve Voice Cycle team cycling to raise awareness and lending his sports therapy expertise. This cause is one that is very important to everyone in our family as we lost my mother, Lydia, to the disease when she was 92.

My mother was a very brave and independent woman and at 92 she was still quite fit and well. She lived on her own and rarely called on me for help unless it was to get some shopping in for her and she was always out and about in her garden. When she found herself getting breathless and experienced some minor chest pains she assumed it was part of being old and when she told her GP, he told her the same thing.

Unfortunately once she was diagnosed with heart valve disease, she wasn't told about her treatment options until it was too late. While she eventually received a valve replacement, it wasn’t soon enough and a treatment that would have saved her earlier wasn’t able to save her now.

It is for this reason that Adrian, Jonathan and I are very adamant in our belief that not only the public, but also clinicians need to be more aware of the symptoms of heart valve disease. I know that if my mother had known more, she would have gone for tests sooner and she may even still be here today. I am so happy that Adrian and Jonathan are participating in such a fantastic awareness raising cause and wish them and the Heart Valve Voice team all the best on their journey.