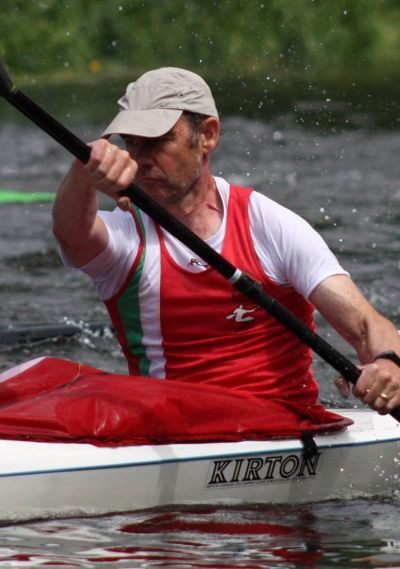 Mark Blatchly, Deputy Head Teacher and amateur athlete, lived a well-balanced, varied life with a healthy mix of career, family and marathon kayaking, until a shock discovery threatened to capsize everything. After decades of teaching others, he found himself learning the biggest lessons of his life: how to survive a terminal cancer prognosis, then heart valve disease.

In 2014, Mark’s wife Rachel, a practising GP, noticed a lump in Mark’s neck. This proved to be cancer in a lymph node. Surgery on his neck followed and for a while Mark was stable. A few months later he found a lump in his groin and subsequent body scans revealed aggressive tumours including two in his brain. Mark was diagnosed with stage four metastatic melanoma at the age of 50 and was informed that the treatment he was referred for, gamma knife radiotherapy to the brain tumours in Sheffield, would not be performed as his prognosis was considered terminal and his cancer was not under control. Mark and his family were devastated.

Things looked bleak until it was suggested that Mark undergo a recently NICE-approved treatment called immunotherapy. In May 2015, after three out of four treatments, Mark’s cancer was stable and his oncology Professor urged the hospital in Sheffield to accept him for gamma knife radiotherapy. This time his plea was successful, and so was the treatment. The tumour disintegrated. So far so good, except that Mark’s groin dissection earlier in the year was now causing serious infection and kidney damage, and exacerbating a hidden heart condition.

Mark was overcome by devastating fatigue. Given his formidable fitness record this could so easily have been taken for another stage in his cancer journey, but Rachel speedily detected heart valve disease, “The speed of decline and deterioration was frightening,” said Mark. “I gasped for breath on the walk to and from school with my children, my chest hurt and I was too weak to carry a bag up a few stairs for my wife. I thought the cancer, the infection or both were about to finish me off, but my wife was convinced that heart failure would kill me first. She could literally hear my heart ‘whooshing’ even without a stethoscope. Serious chest pain led to a 999 call and a spell in Cardiac Care.

Mark was diagnosed with severe mitral valve regurgitation, a condition usually requiring open heart surgery, but the cardiac team felt this was too invasive given all that Mark had been through. However, the chosen solution of having a minimally-invasive standard arterial stent wouldn’t tackle the faulty mitral valve. So Mark’s oncology team pressed for open heart surgery to make an effective repair. “My fantastic cardiac surgeon, Adam Szafranek, walked me into the intensive unit and said this is what you’ll see after surgery. I said ‘where do I sign?”

Surgeon Adam Szafranek of Nottingham University Hospitals Trust, “Mark was one of the first people to undergo open heart surgery while receiving immunotherapy cancer treatment and we learnt a great deal from him. His case was a valuable opportunity to work cohesively as a multi-disciplinary team with Professor Patel of oncology, in a situation demanded by a growing number of cases. Mark was made aware of the considerable risks involved and was courageous enough to take them, and as a result we’ve been able to give him fresh heart –literally – to continue his fight for longer-term survival.”

After the successful repair of his mitral valve Mark made a textbook recovery and is now back to the level of fitness he enjoyed before his cancer treatment with a resting pulse of 40-45 and heart rate of approximately 180 during exercise. “The amazing repair has given me my life back and more; I’m a husband, father and sportsman again, an interesting case study for my cardiac team and now I volunteer to raise awareness of heart valve disease whenever possible.”