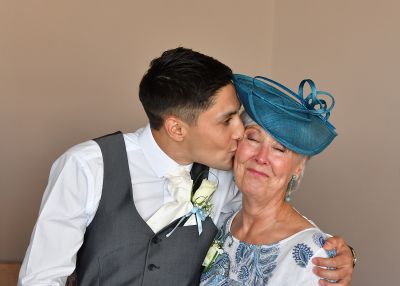 Pat Khan, Patient Action Group member and mum of two recently travelled to Cyprus to celebrate the wedding of her 29 year old son Emil Khan. When they think back to the way Pat was before her surgery, there were times when they weren’t sure if she would have the energy to make a trip such as this. Now Pat has more energy than ever and not only made the journey but was a big help on the day too.

I recently celebrated my youngest son’s wedding and it was such a wonderful day! We travelled to Cyprus for the event and I was involved in helping everything run smoothly. Both the bride and my son were radiant and I couldn’t have been happier to celebrate the day with them. It’s experiences like this one that make me truly appreciate the second chance my heart valve surgery has given to me. Seeing my son marry the love of his life has been one of the happiest moments.

“I was so happy to have my mum share in my big day,” said Emil who recalls what Pat was like before her surgery, “Mum was winding down like a clockwork toy during the seven years of watchful waiting, her energy had been depleting gradually and she’d been breathless and lethargic. Four days after surgery she was back home, impatient to get cooking on her beloved Aga and doing her exercises. She says she feels better than ever, her positivity and mindfulness are what we love most about her – not to mention Sunday lunches and brownies.”