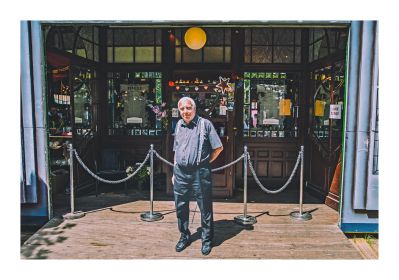 Rockin' on After Treatment, Alan, 77 Performs in Dorset Dance Festival

Less than a year after his treatment for heart valve disease, modern jive enthusiast Alan Tancred can’t wait to tread the boards at a sell-out three-day dance festival in Dorset on the weekend of the 23rd of November.

Before treatment, Alan was too tired and out of breath to jive and thought his dancing days were over. Now he’s ready to jump in and out of workshops on every style from rockin’ blues to latin and ballroom.

We caught up with Alan – who was also partnered the winning photographer in this year’s Patient Portraits: A New You photography competition – as he dusted off his “six-pack” costume ready for Sunday’s fancy dress event.

“This is the tenth Warmwell MJROC dance weekender and my sixth, but if my GP hadn’t picked up a murmur after I told him how my symptoms were affecting my dancing, I’d have missed it.”

His GP referred Alan for further tests which led to an echocardiogram and put Alan on a patient pathway leading to a TAVI treatment at the Royal Sussex Hospital.

Alan speedily bounced back and just two weeks after receiving his TAVI, joined BBC Strictly’s Oti Mabuse on stage at a dance event, and has attended other major events in Brighton and Italy since.

“I’m a huge fan of Strictly so it was a joy to manage just a couple of steps with Oti,” said Alan, whose current favourite Strictly star is Stacey Dooley.