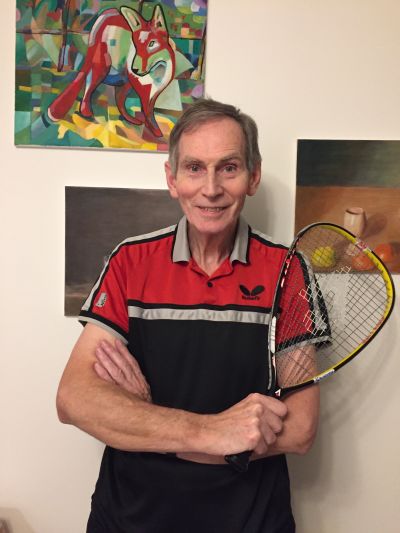 It was during a company health check in 2000 that Alan discovered he had a heart murmur. After being told it wasn’t serious it was left alone until 2010 when Alan started to receive an annual ECG (Echocardiogram) to check on the progress of the disease. Due to his leaky valves, this resulted in Alan’s heart becoming enlarged which could only be resolved through surgery. In 2016 Alan underwent open heart surgery and received a mechanical valve for both his mitral and aortic valve.

After being told in 2000 that a heart murmur was detected it wasn’t until 2010 that Alan started to receive an annual ECG to check up on the progress of his heart. In 2016 during one of these check ups, Alan was told that his enlarged heart and leaking valves would lead to a serious health issue if not corrected. In July of that year, Alan received mechanical valves to his mitral and aorta during open heart surgery. Surprisingly, six months before his surgery Alan was still playing racketball and experienced very few symptoms, except a few episodes of heart palpitation, despite having an enlarged heart. However, around the time of his operation his blood pressure had increased to between 130-140, meaning that his heart was under a lot of pressure as a direct result of his leaky valves.

“I had heard of people having heart murmurs which they seem to live with without it being a serious issue. I didn’t understand the full implications, like an enlarging heart for instance”

Due to not having any serious symptoms, Alan just presumed it wouldn’t be a problem and it wasn’t until he was told that his heart was enlarged, causing the leaks to increase, that surgery was recommended as a solution.

“I think my defence was to ignore it and hope it would not reach a critical point. I would normally say if it’s not broken then don’t fix it, but in this case it seem smarter to be proactive and address the problem before it became a serious health issue.”

Within five days of having surgery, Alan was back on his feet and was allowed to go home on the 8th day. Whilst at home Alan followed the walking routine the hospital had given him, though at the beginning Alan could only manage around 100m before sitting down. It wasn’t until three months later that he started to get back to normal and a little while before he got back to enjoying racketball. It wasn’t until Alan returned to playing racketball that he realized that the heart valve disease had actually been holding him back all these years.

“Prior to my operation I guess I didn't really know how active I would be able to be in the future. Now I race around the court like people much younger.”

Alan still receives yearly echocardiograms and pacemaker checks through his local hospital. He also takes blood thinner medication to avoid clotting around his mechanical heart valves, but this hasn’t stopped him from doing the things he loves. Alan got the opportunity to participate in the abseil off the side of the St.Thomas’ Hospital, in London, last May with three other Heart Valve Voice patient advocates, and is living a full and active life