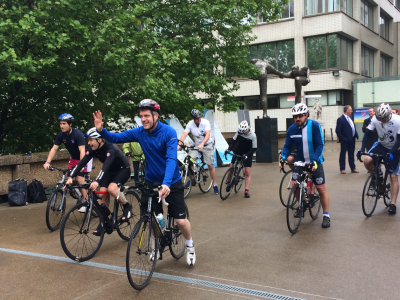 We did it! The 2017 Heart Valve Voice Cycle ride ended with a successful finish at the EuroPCR conference Paris on Wednesday 17 May. The team made it over 200 miles and through cities, towns and villages over two countries to reach their ultimate goal of presenting the Heart Valve Voice message of raising awareness of heart valve disease on stage at EuroPCR.

“It has been a real honour to be the senior ambassador for the Heart Valve Voice cycle team. They have completed a mighty feat by cycling from London to Paris and they have done it all in the name of heart valve disease awareness,” Said Phil McCarthy. “This disease is far too underrepresented and it is vital that we make, not only the general public, but also the medical community aware of its prevalence, symptoms and treatment options. By drawing attention to the disease the cycle team has done a great thing but they have also made some wonderful memories and great friends. Well done to the whole team, I couldn’t be prouder.”

On the first day of the tour the team cycled from London to New Haven. The first day only had a few glitches including a fall and a couple of punctures but the team made it through the rain to New Haven all in one piece. Pat Khan, our patient ambassador, had a wonderful time despite the weather and getting a little lost in the dark with teammates Adrian and Helen, but the adventure was worth it!

The next day involved the ferry trip across the channel into Dieppe where we were greeted with plenty of sunshine and warm temperatures. Slathered in sunscreen the team took off for their second leg of the tour and the first leg in France. The scenery was beautiful and the weather couldn't have been better. This was the longest part of the trip in miles and everyone put in their best effort to arrive in Beauvais. While there were clear front runners in the pack, everyone was pleasantly surprised when teammate Anwen, who is new to cycling, was one of the first to arrive.

The third and final day also began with more sunny weather. The team set off early to make it into Paris and the day involved stops in some beautiful villages with ancient architecture and delicious croissants. One of our teammates suffered a few punctures but he was a true testament to the strength and determination of the #HVVCycle17 team as he refused to give up and finished the ride to Paris. The team all made it to the Arc De Triomphe for a quick stop then rushed to the stage at EuroPCR.

Wil Woan, Heart Valve Voice CEO gave an excellent presentation supported by the entire team to the cardiac specialists at EuroPCR and it was one of the highlights of the day. Following the presentation TAVI pioneer and interventional cardiologist, Alain Cribier, stopped by to pledge his commitment to helping the cause of raising awareness for heart valve disease and it was a great honour for the team to meet him.

The whole tour was a great success and as such Heart Valve Voice has been inspired to do it all again next year. The entire journey would not have been possible without the help and support from our support team at Bicycle Buddies who kept the team on route and made sure they were well looked after. The team also would like to thank all of the sponsors who also helped make this ride happen - thank you to LivaNova, Edwards Life Sciences, GE Healthcare, Rinicare, British Heart Valve Society, Cyclism and Arragon Cycles.